There will be seven of us at the table for Xmas Dinner this year and I went round everyone asking if it would be a terrible disaster if we didn't have a Chrissy pud just this once - this being due to the fact that I had cancelled my trip to Liverpool in November when I would have brought a pud back and not knowing where I could rustle one up in Deepest Bavaria. The reaction was more or less what I expected; no one was really bothered, in fact hardly anyone really liked Chrissy pud anyway.

I hated it as a kid. It's just not a kids' dessert - all those dark and spicy tastes - but I ate it because there was money in it!

Deep inside the inner darkness of the pud threepenny bits and tanners (sixpenny bits) were lurking and if there was one in your dollop of pudding you could keep it. I actually had a love/hate relationship with that tradition too. I loved the money of course but hated biting into a piece of pudding and nearly breaking my teeth on the hard metal coin and having that taste of ... erm, coin (didn't you put coins in your mouth when you were a kid??). In the end I used to eat my Chrissy pud without completely closing my jaws.

In fact, wasn't that nutty pounds, shillings and pence currency brilliant too? There is just something wonderfully anarchic about having a currency where 12 pence make one shilling and 20 shillings make a pound. The fun we had at school adding and multiplying all that lot!

Pound notes, ten bob notes and then the coins... I am (believe it or not) too young to remember farthings but the concept of having a coin worth a quarter of a penny - great! And then threepences which where a quarter of a shilling and sixpences which were of course half. Then there was the half crown, worth two shillings and sixpence (2/6) - half of something that didn't exist any more (apparently crowns were minted until the sixties but I never saw one in normal day to day transactions nor did I ever hear of anyone who had seen one). Eight of these half crowns of course made a pound. Eight!

And all this calculating in base 12 and base 20 never seemed strange or difficult. You could buy, say, three things in a shop which cost 3s 6d, 10s 4d and 15s 9d and quick as a flash the shopkeeper would know that it came to 1 pound 9s 7d - without electric tills to add it up.

Ah, and the abbreviations... yeah - more anarchy. Lsd... yep, it was called lsd, pronounced, "pounds, shillings and pence". For shillings, not unreasonably, we used "s" but for pennies we used "d" and for pounds "L" which was elaborated into the pound sign (which I can't get to work in blogspot). Why L and why d? Cos it's Latin of course! L was short for librum, a Roman unit of weight, and d was for denarius, a Roman coin.

Now, the pound was related to the value of a certain weight of a certain quality of gold. Unfortunately in Guinea the Brits found a gold of a higher purity and so the same weight of that gold was worth more than 20 shillings... consequently we also had the "guinea", as an even more eccentric member of what was already a pretty wacky family of currency denominations, which was worth 21s. As a kid I remember that prices for cars and furniture were always quoted in guineas. This was a brilliant double whammy. The prices would be something like "899 guineas" so that you had the standard 99 trick to make you think, "duh, it's only 800, that's cheap!" coupled with the fact that each of those 899 guineas was one pound and one shilling... so another 5% more than you thought!

So you don't just have a currency, you have multibase mathematics, history, geography and metallurgy all mixed in together... a bit like a Chrissy Pud... ah! Yeah... so, anyway... I managed to get one, a Chrissy pud, because... well, because Xmas just wouldn't be the same without eating something that no one likes!

It's strange - every time I go to cross a road at the moment I have a curious feeling at the back of my mind that I am going to be run over. It doesn't matter what kind of road it is - wide or narrow, busy or deserted... 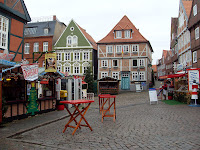 Maybe I have just been on the road too long - the Diddly Tour 2008 came to an end last Sunday morning at about 06.30 when we got back from...somewhere. Over the last few weekends alone we have clocked up nearly 4000 kilometres driving the length and breadth of Germany.

From the north in Stade (above right) near Hamburg to the far south-west in Freiburg and through Mainz (below left) in Hessen to Regensburg in the east we have diddle-skiddly-idled all over. 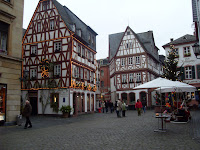 From hotel to hotel, location to location with the result that most of the time we didn't know where we were.


Anyhow, that's it for now - no more of this until next year; and the good side is I have the perfect reason for feeling run down.

(CD available from the band's website!)
Posted by Neutron at 7:55 pm No comments: