Have a Good Flight, Bid

I took my younger daughter to Munich airport today to fly off with 3 friends to India! They first flew to London and spent all afternoon in the airport; just now they must be sitting in their plane for Bombay. It has been delayed an hour for some reason but now they're off...for TWO months.

What a weird feeling this is watching the online updates from Heathrow and British Airways, imagining them settling down in their seats getting ready for an eight-hour flight after hanging round Heathrow all day looking for ways to pass the time...

UPDATE - midnight: looks like they have finally taken off, one and a half hours late. So now they are flying back the way they flew this morning and in a couple of hours they will be over Munich again... shall have to look out of the window and give them a wave...
Posted by Neutron at 11:34 pm 2 comments:

Even though I am in deepest Bavaria it somehow seems like England this morning. It is very autumnal outside the last of the leaves are coming down and there's something English about the soggy sky and the rustling leaves. Listened a bit to Radio 4 online, have just put the finishing touches to the Sunday dinner - pork in apple sauce, with sprouts and potatoes - and now I could just do with a stroll up the road with my dad for a pre-prandial pint...

Do people in England still do that sort of thing?? They are probably all sat in front of their home entertainment centres having a microwaved Thai curry...
Posted by Neutron at 2:11 pm 2 comments:

I was thinking about 51; what can you do with that number? Divide it into 3 seventeens or take it from 100 leaving 49 which is the square of 7? And then I recalled a book someone lent me on reading Tarot cards.

It was real hoot of a book written by some Mystic Mrs.

The best thing in it - and there was loads to chuckle about - was her ongoing struggle throughout to bend over backwards in order to make the Jungian term archetype fit into her scheme of things. Her problem was that she thought the arche part of archetype was derived from the Latin arca meaning 'arch'.

She then had to find some way of explaining why the illustrations on the Tarot cards are often referred to as being archetypal images. This caused her all kinds of convoluted spine-splitting bends and twists as she tried to convince her reader that the archetypes are the kind of angle, or arch in which we view the Whole. Where she conjured that bit of gobbledigook from I do not know.

It would all have been so much easier if she had just looked archetype up in a dictionary!

Anyway, there was a section in the book which said you could work out the something or other about yourself by adding together the digits of your date of birth! So, for example you add together the year, say, 1969, and you get 1 + 9 + 6 + 9 = 25 then you add 2 to 5 and end up with 7 - this means you should never look at a black cat in a broken mirror if there is an "r" in the month.

It's my birthday tomorrow!!!

At what age is it that you stop looking forward to birthdays and start dreading them?

The bloke who regularly fixes my bus is what they call a waschechter Bayer - a-dyed-in-the-wool Bavarian. Everyone calls him Ludwig but his name his Dietmar and he's a dab hand with cars. When I told him over the phone the noises Buzzy had made he said, "clutch" (Bavarians tend towards an almost Benedictine taciturnity), "maybe gearbox."

He came round to ours last Tuesday - a public holiday in Germany - with a gift of two loaves of home-baked bread and two pots of home made jam and then drove me to where I had had to abandon Buzzy... on the way we had to stop at his mother's allotment... he had to fix the water tap in the garden... before we left the allotment he had given me two of the lettuces which were growing there, one cucumber he picked from the... whatever cucumbers grow on, two carrots pulled out of the earth and washed under the now functioning tap; we had meanwhile also tried some yellowy raspberry things and the petals of a flower which he insisted tasted like pepper and I thought tasted like soggy tissue paper. We got to Buzzy, he had a look; "clutch . . . and maybe gearbox". We then drove in convoy to his workshop at about 15 m.p.h.

Finally he drove me home again.

And why am I telling you all this? Well, mainly because Ludwig saved me having to make the dreaded decision. Unbeknown to me, as soon as he heard about Buzzy, he had ordered a clutch so he could get the repair done quickly! That allowed me to feel duty bound to have the repair done; ergo niente decisiones (for the non-Classically educated, that is the hopelessly, ludicrously wrong Latin for therefore no decisions)

And maybe his inscrutable, chthonic Bavarian instincts told him that no matter how long I agonised about the decision, my rational, sensible, economy-thinking head would still have been slowly bludgeoned into submission by my dozy, sentimental, spendthrift heart.
Posted by Neutron at 11:43 pm 2 comments:

To Buzzy or not to Buzzy...

Regular perusers (both of you) will recall my bus, Buzzy and that he had a slight problem last Monday - well, I just got a call from the mechanic.

New clutch is going to cost around 400€; second-hand gearbox around 500€ plus labour.. ouch!

The question I have to put to myself though is: "is it worth it?"

Buzzy, as I have mentioned, is 18 already - so from that point of view the answer is "no".

But, as I have also mentioned, he is a member of the family too - so does that mean a "yes"?

Did I complain down below that I was being called an old softie?

This is a view of us from Saturn taken by the Cassini probe - that little tiny dot about the size of a pixel under the wider ring is the earth. In the inset you can see a slight protuberance at the top left - that is the moon. A holiday snapshot from 930 million miles away. Stuff like this never ceases to send chills down my spine.
Posted by Neutron at 2:59 am No comments:

From An Old Softie

This is a first for me - posting a YouTube video (it's DEAD EASY!!).
Anyway, having been called an old softie a few times this week I thought I would post this video and see how YOU get on...!
Posted by Neutron at 3:38 pm 1 comment:

...just remembered - we have a box reserved in one of the "tents" at the Oktoberfest today - which means, sadly, I am obliged to go and drink lots of beer again...

The move went ok... apart from a few minor details: like my fully-laden bus breaking down...

But you can say what you like, our Buzzy is a fine and noble bus. He always manages to get us home or failing that to make sure that any breakdown happens in a not too inconvenient location. This was a case in point. We had just loaded as much of Nicky's stuff as we could jam in and were setting off for her new place. Before we had even covered the first 100 yards and left the estate he was making warning noises, strange grinding banging sounds which I had never heard before.

Knowing Buzzy, I interpreted this as him saying to me:
"look, pal - I know Nicky is moving and it's important and all that but I have a problem here and before we set off and then break down in the middle of the frantic afternoon traffic right near where the Oktoberfest in being held with a bus full to the top of furniture and bags and so on, it might be better to turn back and think of getting a different vehicle on the job..."

So we did turn back and after some hectic phone calls managed to find a company nearby where we could rent a van for 3 hours. So we went and picked it up, came back, transferred the furniture etc and set off again. This time it was all ok, except for the mad traffic, and Nick was quickly installed in her new place.

Then that strange phase started where Nicky was then "home" and we (her mother, sister, brother and myself) were standing around looking awkward and out of place; feeling that we should leave but not knowing how to...

We were sort of saved in the end by having to go to get the van back in time. So off we went...

I just realised that I actually asked her where she was going to sleep yesterday evening! What a stoopid question... (I will let you think about the psychological background implications!!)

So we took the van back and then returned to find a forlorn Buzzy. He's getting towed to the garage shortly, I think to have a reunification of clutch and engine. 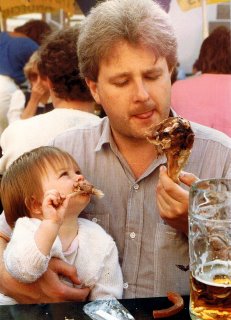 Our Nick - seen here enjoying dinner with me many dinners ago - is moving into her own place today!

This guarantees me a bad back but also a wistful sentimental feeling made up of wondering where all the time has gone and foolishly wishing in vain it was all somehow the way it used to be along with being pleased for her that she is making the next step in her life...