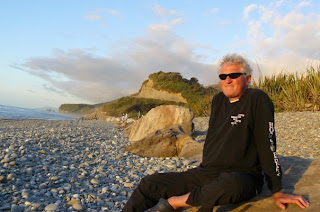 I'm trying and failing to reconcile two concepts or entities: Helmut and death - the two just don't go together in my head. And yet, in harsh, uncaring reality, sadly, unbelievably, they must.
I first met Helmut in 1983. We were expecting our first child and being in deepest Bavaria, far from grandparents, had decided to look for a couple in a similar position to share a house with, and share the experiences of parenthood. We met a few couples but hit it off with Robin and Helmut. We found a house where we could share the ground floor, living room and kitchen and where we would each have a floor for ourselves with bedroom, bathroom and children's room.
Amazingly, given that we had only met via a newspaper advert, and seeing that I am a cantankerous bastard who doesn't really like people at the best of times, it worked really well, and we ended up living together for 7 years, by which time there were four and a half kids, Andy, Nicky, Michelle, Biddy, and Christopher on the way.
I went to football games with Helmut, he introduced me (as anti-sport-playing as you can be) to squash, a game I came to love, we shared jokes and stories, he was honest and straightforward, generous and helpful, simply a really nice guy who loved being alive and who knew how to enjoy life. In thousands of little and big ways Helmut touched and enriched the lives of people around him.
Well, now Helmut is gone, he is dead, in the blink of an eye the finality has enfolded him; Helmut and death are one. We are using the past tense for him, we are speaking about a funeral for Helmut - a what?? A funeral?? For Helmut???
And I don't know what to say, I don't know how to grasp it.
Everyone is helping, everyone is grieving, everyone is doing their best to help everyone else but now everyone also bears an empty, black, Helmut-shaped hole inside them.
Posted by Neutron at 12:13 am 4 comments: