For those of you waiting with that good old bated breath to find out what that frozen beer tasted like...

I'm sorry to confess that it took quite a while to get round to trying it. I didn't want to try it without being sure of having a few other beers in just in case but then when I had a few beers in, I simply ignored the unfrozen half-opened experimental bottle.

Anyway I tried it on Tuesday and it was f****** HORRIBLE!

So if you have forgotten your beer in the freezer and you think, "hmm, maybe blah blah..."

..I was watching every news programme, science update, etc, I could about the Apollo 11 mission which was well under way at this point.

Take-off was yesterday 40 years ago...and the landing would be this Monday, 20th...although we were sat watching it at 3.00a.m. on the 21st in Liverpool.

NASA has released pictures today from the LRO of 5 of the 6 landing sites here. It won't convince any of the misguided Apollo hoax doughnuts - but what would?
(By the way, Apollo hoaxers, you do realise there were 6 landings don't you? Did NASA fake them all? Did they fake the other 3 lunar circumnavigations, Apollo 8, Apollo 10 and Apollo 13? What about the other Apollo missions...7 and 9? Faked? And the fire..etc etc? Ho hum.)

There is also a great website where you can follow the mission in "real" time - sort of forty-years-ago-real-time:

We Choose the Moon

I was looking in the fridge for something to have for lunch...opened the freezer and found...this!! 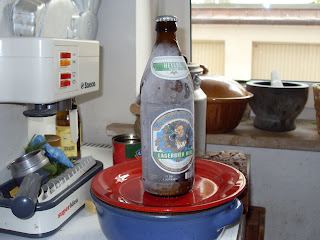 Yes, a bottle of Augustiner...frozen solid. Amazingly it hadn't cracked - but this is still a potential disaster. At the moment it is thawing in the kitchen and later I will simply have to try and drink it.

This happened to me once before, many many years ago, and the bottle had actually cracked but the beer was still frozen. It took me many hours of creative thinking before I finally was forced to admit that I would have to sling it because the danger of swallowing glass splinters was too great even if I poured the thawed out beer through a fine sieve...

It still rankles that I had to throw it away.
Posted by Neutron at 2:38 pm 5 comments: