Come to think of it I have watched quite a few "situations" develop on CNN and it always amazes me how they wheel out these experts from some deep-freeze storage room to gabble on whatever subject it might be. Right now it's the Pope...he has received the last rites...but at the moment the reporters are being meticulously careful to STRESS that the Pope might not be dying. So far they have waffled their way through one hour of programming time and have repeated themselves shamelessly about a thousand times! The correspondent in Rome, Leonardo da Vinci...no surely not, had a few difficulties with "urinary tract" and "running a high fever" but he is struggling on personfully ...oh, now according to Leo he has a "urinary infection to his tract".
I think the first crisis was Desert Storm back in...when was it???!! 1991?? Since then we have had Yugoslavia, Lady Di, 9.11 in New York, Iraq...oh and loads more which I will recall presently...
the main problem I have with all this is the very clear impression you get that the reporters are saying, "thank goodness for this crisis...it gets me a great TV profile and great ratings..." and advertisers falling over themselves to slip in their slots. (That can go wrong though...when I was working in advertising back in London we had a late night panic because a cheery ad for British Gas had been erroneously scheduled in the midst of a documentary about concentration camp gas chambers....whoops!)
"However, now we go over to our new correspondent in Rome, Delia...."
"Well, Wolf..."
Posted by Neutron at 11:54 pm No comments:

Yesterday was Good Friday in this part of the world and it was pretty good. A walk in the itchy spring fresh air along the fast-flowing Isar, swollen with melt water from the snow which until last week had plagued us abominably and then into a Wirtshaus for a few of their brewed-on-the-premises beers...
The world looks a lot better viewed through the bottom of a couple of beer glasses. Drinking in the afternoon though invariably leads to soporific tele-gawping slumped on the couch in the evening...so what was on offer?
Well, how about the Ten Commandments with Charlton Heston and Yul Brynner, a blockbusting bore from the fifties - the kind of film the phrase "...with a cast of thousands!!" was invented for - or if not that then how about four or five other miserable films about Jesus meeting his fate. According to these Hollywood epics humour did not exist in those ancient days...I think I would like to see 'The Life of Brian' on offer on Good Friday. But Bavaria takes its Easter dead seriously.
When I finally gained possession of the remote control after everyone had slunk off to bed I had the chance to do a bit of zapping...and low and behold, on Pro 7 here was that Easter classic 'Die Hard' (I found the name out afterwards being too slumped at that moment to get up and look in the tele guide). From the sweat and blood smeared all over Brucie's torso and arms it looked like I'd missed about fifteen minutes...and that was a stroke of luck cos it made the film mildly interesting for me trying to work out who everyone was and what the bleedin' hell was going on! I still don't know why Brucie took his shoes off...and who the bloke was in the stretch limo...but otherwise I got it pretty well sussed out.
Tell you what though, old JC could have done with a bit of this kind of fire in his belly on the way up to Golgotha...a couple of machine guns and a bomb or two would have ruined the Romans' day. But he film ran its course with incredibly bad marksmanship from the professional killers and some lucky escapes - well, impossible escapes really - culminating in a Hollywood "surprise" end, like Terminator, Godzilla or Hollow Man, to name just three. There we were at the end breathing a sigh of relief as Brucie wrapped his blood-stained arms around his (estranged?) wife when who should appear on the steps but the baddy we all thought was dead!! He was last shown hanging from a chain wrapped round his neck about twenty feet in the air under a ceiling which was about to explode with enough violence to blow off the top of the building and destroy two (?) three (?) or four FBI helicopters which were going to land on the roof...well, foolish we! He was only unconscious or perhaps meditating...maybe just lulled into sleep by the screams of panic all around him. So, he must have awoken - maybe the noise from the blast just above his head disturbed him! Just imagine it...you wake up with a strange feeling of not being in your own bed and then you realise...ha, of course...I'm swinging up in the air being strangled by a chain round my neck...oh yeah and there has just been a megatonic explosion above me...tsk, tsk...that'll teach me!
So he extricates himself from that bit of bother and still has the energy to snatch up a machine gun, run down thirty six or so flights of stairs and emerge from the lobby of the devastated building to a forecourt swarming with police, still burning with rage and a deep desire to blow Brucie to smithereens...and even the energy to let out a ferocious primal roar which is pretty daft under the circumstances as it alerts everyone to the danger. He gets shot of course...and for him, being just Charlie the professional murderer and not JC, the annointed one, this time there is no resurrection.
Posted by Neutron at 8:28 pm No comments:

I have won the lottery...the Southern German Lottery!!
Riches beyond my wildest dreams!!
I was informed of this yesterday and subsequently in the course of a very discrete ceremony was presented with a cheque for TWENTY EUROS!!!
I have asked the Southern German Lottery to keep my name out of the newspapers and I would ask you also not to pass on this information...I don't want a string of begging letters coming into my postbox.
Will this win change my life? Maybe...I have already started to make plans for the future...I might fill up my bus with diesel for example or buy a crate of beer and live on the deposits...or perhaps a rail trip to, say, Rosenheim.
I will certainly give some of my winnings to my children...let's say two euros each for now...I don't want them to lose their sense of the value of money.
However, probably the best plan would be to build a house...how many packs of Lego can you get for twenty euros??
Posted by Neutron at 8:28 pm No comments: 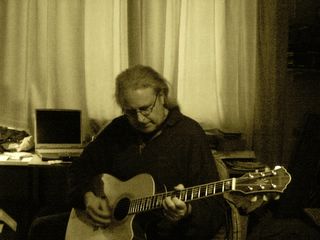 ...replete I am, replete with excellent Rancheros, burping up fresh coriander and snifting a late cognac -tell a lie it's an armagnac...Very Special Old Piss...actually, hang on, the glass is empty - Mustafa Nuvver...oh no - that's the Turkish restaurant - aaahhh.....slurp.

The owner of the restaurant came over for a chat - as they do on Wednesday nights when there's no-one else there - nice bloke...and he explained how they make everything themselves with fresh ingredients - even their own tachos. "Nothing out of a jar..."

We nodded in polite agreement....and yet I realised then that what I had missed -pleb that I am - was something out of a jar....something out of a jar that you could find in a supermarket... something very plebby that you could find in a bleedin' jar on the shelves of a bleedin' plebby super-bleedin'-market....mexican chile tomato sauce...it is sometimes extremely embarrassing being me...
Posted by Neutron at 9:39 am No comments:

I have always wanted to be a blogger....ever since I found out about blogging about 5 minutes ago! And now here I am, Captain Neutron, embarking on a maiden voyage to Blogdom...setting sail and sliding slowly out of the harbour of Old Groanage....slicing through the webwaves to freedom...!
Posted by Neutron at 5:31 am No comments: