Today’s plan was to get up early and get down into the city before it even started becoming too hot.

The aim – I feel almost ashamed to admit – was Starbucks but ONLY because I had seen, during yesterday’s reconnaissance stroll, that they boasted a hotspot which I wanted to exploit to go online, check my emails, bank account and all those other things which tie us down to reality.

The alarm peeped at 7.30 and was roundly, and unfairly, seeing as though I had set it myself the night before, cursed and immediately fumbled into not peeping again until 8.30. In the end, being wide awake, I compromised and got up at 8, had a shower, shave, and went out. It was still delightfully cool, in the shade at least; in the shade of the wonderful, low-slung trees which grow along the streets and boulevards of the city. These trees, strangely, give the city an air of structure, of premeditation and order which the buildings, leaping chaotically up 5 or 6 storeys with ugly air-conditioning units hanging from every window or dirty net curtains billowing out ‘like the underskirts of a slattern’ (that’s Steinbeck again - if you’re gonna steal, steal from the best), completely lack.

The trees paradoxically bring a calm regularity, peacefulness, organisation and majestic serenity to all the loud frantic noise and hectic bustle of your normal Thessalonican street.

I don’t know why but when I am faced with having to do something which could be considered a bit of a pose like, go into an establishment and get out my laptop and go online, I tend to get a bit self-conscious and compensate by being over-nonchalant. Maybe it’s a bit like mistakenly turning up at a funeral in a clown outfit and trying to face it out as if I always go to funerals dressed like that. I walked past Starbuck’s first sneaking a glance with the hope that someone would be in there already online with their own laptop, but no, only people drinking ‘coffee’. As I said, I don’t know why I am like this but perhaps I can hear a distant mocking echo from my intolerant, non-travelled youth saying, “get a load of him with his bleedin’ laptop, posing git!”

Finally, after a last bout of dithering, I went in, ordered a ‘coffee’, discovered that there was an upstairs, went up to find it empty (probably because it was hot and horrible) but decided to set up the laptop there in a secluded corner.

My experience of hotspots is that you either get online time free or you have to pay for an hour, or five hours, or whatever, using your credit card – that is, after you have finally managed to set the laptop to accept the signal.

Not Starbucks, though; the provider they use wants you to have a monthly subscription and a card with a log-in name and password they would have supplied you with after taking said subscription out!

Bugger! But one more reason never to frequent a Starbucks again!

So I packed up my poor laptop who had done his 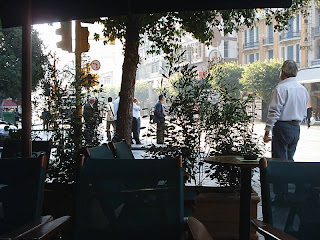 best to set up a connection and went downstairs to take a seat outside and watch Egnatia (another parallel) slowly come more and more to life. This is, in the end, what drinking coffee in a street café is all about isn’t it? Lolling lazily in your seat, sipping at your cup while the world goes careering past in an insane frenzy? Pure, unadulterated Schadenfreude – and is it good!

I wandered down to the harbour, strolled through the strangely deserted passenger embarkation halls, and then turned up through a little square with pubs and cafés, and up through the city, steeper and steeper, like walking up the inside of an octagon, back to the flat, arriving back at 11 o’clock; sweaty and not having made contact with those things which tie us down to reality, and actually …who cares? 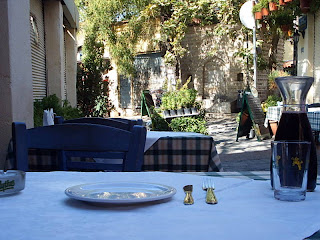 My reward for doing all this was to go and have lunch at a taverna just around the corner. Not the same one as the other evening but one up a little pedestrian way where no rattling cars or whining mopeds would go past.

There were only a couple of guests and a young disinterested waitress who looked chronically glum. There will be no “very very good speak the Greek” from her – doubt if I’ll even get a smile from her. I looked at the menu and she came over and plonked some cutlery on the table. I ordered:

Ti tha pieite? What would you like to drink?

Ah, to krasi, to kokkino, einai gluko? The red wine, is it sweet?

(The local wines from the barrel are sometimes sweet …just wanted to be sure …and I couldn’t remember the Greek for “dry wine”.)

She didn’t feel the need to elaborate so I ordered half a litre.

She went off. She wasn’t unfriendly or rude – it just seemed as is someone had cut off the gas supply to her inner fire.

The wine came and the bread, normal white bread and warm pita bread. The wine was purply-red, I poured myself a glass and sipped at it …wow, bloody great. Tzatziki came, mmm, big plate of patates, even mmmmier, and then the grilled mprizola, simply grilled. I must have eaten hundreds of them in Ioannina – just love the succulent grilled meat and the grilled bits of fat … definitely mmmmmiest.

I hope you know this feeling; good food, half way through your wine and you are gradually suffused with a feeling that the world is not bad, nay, indeed verrily, the world is good. This is followed by a deep inner sigh of relief and contentment. It is at times like this that I would, if I were at all religious, offer up a prayer of thanks to Dionysos or Bacchus. I would also like to think that he is not amongst the dodeka theous whom my graffiti spraying friend would want to gamei!

That moment of rapture was interrupted by the ringing of a mobile phone. It was the waitress’s.

I had to sneak a quick look round…and yes, her face was lit up with a big smile …someone had obviously put a shilling in her metre. She took my look to be a sign I wanted something and got up but I gestured to her that everything was ok.

I had all I needed. 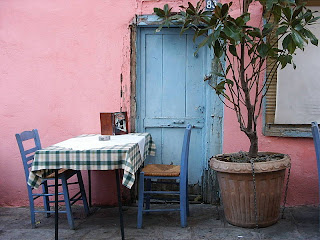